The Libya Exchange is co-hosted by Omeyya Seddik (Al-Muqaddima), Nicholas Noe (Mideastwire.com) and Monica Marks (Oxford University). As with our other Exchanges over the past decade, the aim of the conference is to provide direct and intensive insight into Libya from several perspectives, especially those of Libyans themselves.

The Libya Exchange will be held over the five days at the conference room of The Africa Hotel in downtown Tunis, from 9am until 6pm, except for the final day (Sunday, December 3) when the Exchange will end at 3pm. In order to promote small group dynamics, the number of participants will be capped at 30. Sessions themselves will be conducted on an individual rather than a panel basis for all speakers and will allow ample opportunity for question time (translation into English will be provided when necessary). All sessions will also be held under strict Chatham House rules, although we customarily work with our speakers to approve any quotes/references that participants may need for their own work.

Participants will have the opportunity to meet, listen and engage social, political and economic actors from across the spectrum in Libya as well as specialists whose work focuses on Libya and its relations with neighbouring countries.

NOTE: Accepted participants will receive the full list of confirmed speakers one month prior to the opening of the Exchange, as well as readings pertinent to the sessions.

The Government of National Accord

The House of Representatives

Representative of the City of Zintan

Representative of the City of Zuwara

Representative of the City of Misrata

Representative of the City of Sabha

The Tunisian Ministry of Foreign Affairs

Participation Fee - $900; Note that participation fee discounts are available for participants who wish to attend multiple Exchanges. For more information, please email info@thebeirutexchange.com. Furthermore, all our programs are funded on the basis of fees paid by the participants themselves: There is no government, private or non-profit support, an aspect that we believe provides a relatively neutral platform for dialogue and understanding.

Accommodation - $70 for a single room per night at the five star Africa Hotel under our group booking only (breakfast and all taxes are included). Shared rooms are also available upon request and are priced at $45 per participant (we will arrange for sharing with other participants).

Airfare - $300, approximate from the European Union.

Omeyya Seddik is the founder of the Tunisian NGO Al-Muqadimma, established in 2011. He specializes in analysis and mediation between potential parties to conflict in Tunisia and Libya, and serves as an advisor to the Geneva-based Centre for Humanitarian Dialogue (HD Centre).

Monica Marks is a Rhodes Scholar and PhD Candidate at Oxford University. Her work, which focuses on politics, institutional reform, and Islamist movements in Tunisia and Turkey, has appeared in peer-reviewed books and journals, news outlets including The Guardian, The New York Times, Foreign Policy, and The Washington Post, and for think tanks including the Carnegie Endowment, the Brookings Institute, and The Century Foundation. 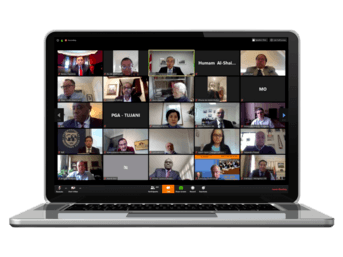 © 2023, All rights reserved to The Foundation for Global Political Exchange non-profit 501(c)3